Hey Good Luck Out There

Hey Good Luck Out There

Subversive, captivating and vividly attuned to both the extraordinary and the mundane, Georgia Toews’ debut novel Hey, Good Luck Out There is a furious and hilarious journey through the relentless, soul-baring world of addiction and recovery.

After an amazingly unpleasant pizza party intervention, our twenty-two-year-old narrator checks into a women’s rehab facility, confined “for her own safety” without meaningful contact with the outside world. For escape, she and her fellow patients have only stilted phone calls with their disappointed and concerned parents, daily meetings in the form of inspirational speeches from wealthy ex-alcoholics and lifestyle gurus, visits to the doctor, and clandestine trips to a dingy internet cafe. For our narrator, a neon-pink journal gifted by her grandmother with gold embossed letters on the front–“Let Them Eat Cake!”–is her only comfort amid an endless carousel of strangeness and unease.

When she is discharged from rehab after thirty punishing days, returned to Toronto’s streets without resources, a job, or an apartment, and tasked with staying clean despite a seemingly bottomless urge to give up, the book asks: What next? What happens in the aftermath of your lowest low? Alone, and at war with an intrusive inner creature, at last she begins the process of making a home for herself in the world.

Hey, Good Luck Out There introduces a dynamic new voice in fiction: Georgia Toews is at once unguardedly truthful, gritty, and darkly funny, with a sardonic, wholly original sense of the absurd. 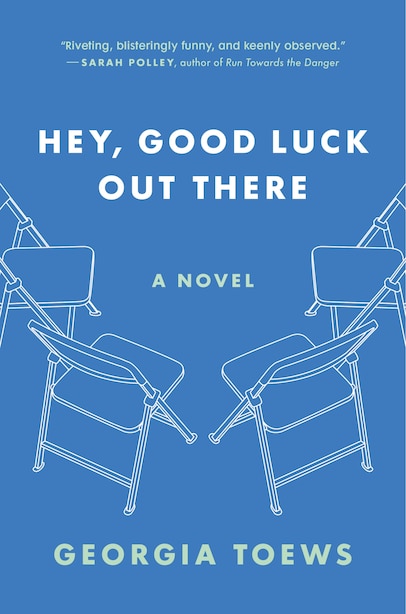